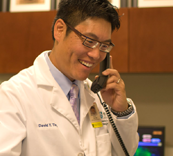 A Doctor Who Looks for the Nexus of Skill, Joy, and Meaning.

Dr. David Ting’s parents always said he had a “pointy butt.” That is to say, he can’t sit still. When his love of cool gadgets and his pursuit of science met a growing sense of duty to help others, he pursued medicine. Now the marriage of his interests is complete: he manages clinical information systems, sees patients, and travels with his wife to set up health centers around the world.

To maintain this driving force, he asks himself (and others) three questions:

Ting believes his job provides a fulfilling solution by allowing him to see patients and integrate technology with clinical practice and information with analytics.

Maybe that’s why Ting looks like he’s always smiling.
“My hope is to inspire others, encourage others,” declares Ting. “When I’m that kind of person, then people tend to be that way with me, and my overall experience is better.”

Ting is not unrealistic about the burdens and pressures of being a doctor in today’s health care system. Yet he says, “Even with all of the demands on physicians, this is still one of the most gratifying professions one can be in. It is most rewarding on a personal level, and from a societal level and the contribution that we make.” His hope is that physicians sustain that sense of mission and the satisfaction of knowing that they’re contributing to people’s lives.

In order to thrive amidst the challenging work life that all doctors face, Ting keeps moving, and keeps trying to make things better. He is perpetual motion, and perpetually upbeat. As long as he’s fixing clinical information systems, teaching villagers in Malawi how to treat illnesses, or building energy-saving cars in his driveway with his kids, he knows things will get better someday.

"The reward is the satisfaction of knowing that you’re contributing to people’s lives. In 15 minutes, you can affect someone."

As a defendant in a recent malpractice suit, Ting credits the work of CRICO with saving his positive outlook.

"I know that when physicians who don’t have CRICO are sued, a good percentage of them either leave medicine, or they have a very different feeling about their patients. They have a very adversarial feeling about society and the profession, and I don’t. And I would say that a big part of that is the work of CRICO and the support that I felt from them."

David Ting, MD, predicts, “If I didn’t have to worry about needing to document everything I do, I could switch that entire part of my brain toward being in the moment.”

Typical of his profession, Ting often sees a different patient every 15 minutes over seven hours, and a single patient visit can mean an hour of associated paperwork. Often, those patient notes don’t get written until he gets home at the end of a very long day. With that schedule, he says, “There is bound to be something that falls through the cracks, so it’s not a matter of if, it’s a matter of when.” Accordingly, Ting and his peers welcome opportunities to hear best practices related to risk management.

News
A Beth Israel Deaconess Medical Center quality improvement project showed how a standardized tool (checklist) to promote team communication and clarification of discrepancies pre-procedure can contribute to prevention of errors.
View All News
X
Cookies help us improve your website experience.
By using our website, you agree to our use of cookies.
Confirm