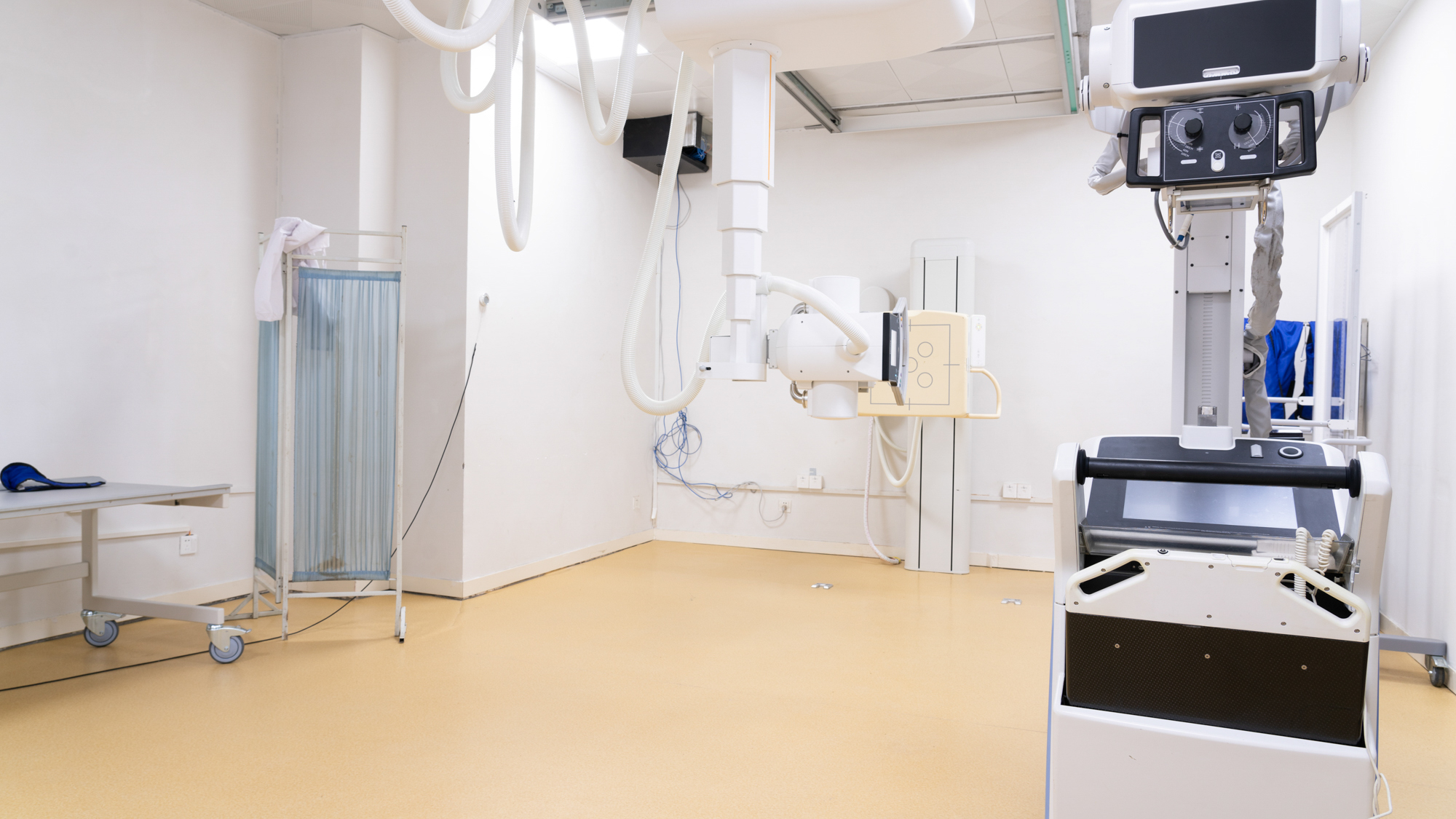 This podcast is an episode of MedMal Insider. You can find other episodes and subscribe using the links to the left.

[Patient’s Daughter]
My mother went to the hospital because her back pain was just too much. I went with her, and told them she’d been getting dizzy too, but… They say they’re going to fix things at the hospital now. I hope so.

[Narrator]
A 55-year-old woman was admitted to the hospital with a diagnosis of osteomyelitis of the spine. She was treated with a course of antibiotics. She had multiple co-morbidities, including hypertension, Type 2 diabetes, and was on dialysis for end-stage renal disease. Two months later, she returned to the hospital with worsening lower back pain. The patient’s daughter reported that her mother had been experiencing periods of instability and dizziness at home, and the nursing staff noted the patient as a high risk for falls.

A standing lumbar spine film to rule out spinal instability was ordered by a covering orthopedic resident. The nurse prepared a transfer checklist and placed it inside the chart (the hospital’s policy is to place this note on the front of the chart). A transporter wheeled the patient to Radiology, where she was received by a technologist with no verbal hand off given about the patient. The technician asked the patient if she was okay to stand, and she said she was. He helped her get into the right position for the film and stepped away to capture the image.

In the time he stepped away, the patient became unstable and fell. The technologist rushed to the patient who was now bleeding from the face and head and was disoriented. A code was called and the patient was stabilized.

The patient was admitted to the ICU. She was unable to swallow or recover mobility, and required a percutaneous gastrostomy tube for feeding. Following transfer to a rehabilitation facility, the patient developed a Stage IV decubitus ulcer of her sacrum. After two years in a nursing home, the patient died.

The patient’s family filed a claim against the organization, alleging that there was a failure to ensure the patient’s safety, resulting in a fall.

The case was settled in the high range.

To discuss the patient safety and risk management aspects of this case, we are joined now by Dr. Adam Schaffer. Dr. Schaffer is a hospitalist at Brigham and Women’s Hospital in Boston and a Senior Clinical Analytic Specialist at CRICO.

Q.) Adam, thank you for joining us.
A.) Thank you for the opportunity to discuss this case today.

Q.) Slips and falls seem to be one of the oldest banes of patient safety in hospitals and clinics and when you look at these, there’s more complexity than we first think in both how they happen or to prevent them. What are the clinical features in this case that stand out to you?
A.) So when we look at this case study, this patient has multiple factors that could increase her risk of falls. For one thing she’s diabetic and among the many complications of diabetes are neuropathy, which can cause decreased sensation of the feet, and decreased vision, both of which can increase the risk of falls. This patient also has end stage renal disease which itself is a complication of diabetes. And she undergoes dialysis, which means there are large shifts in her volume status, which can cause dizziness upon standing, especially soon after undergoing dialysis. This patient has a number of reasons to be at an elevated fall risk.

Q.) It seems like this was identified at an early point when she arrived for this episode.
A.) Yeah, absolutely, and to their credit the nursing staff astutely assessed this patient as being at an elevated fall risk. And so the assessment component by the nurse was sound in this case. However, what seems to me one of the biggest process lesions here was that this fall risk was not adequately communicated to the radiology technician who was performing the lumbar spine film. And so the major process breakdown in this case was related to inadequate communication to providers rather than the earlier assessment phase. CRICO examined this issue in its 2015 Annual Benchmarking Report on Malpractice Risk in Communication Failures. This analysis was based on CRICO’s comparative benchmarking system, which is a database that currently contains almost 400,000 malpractice cases representing about 30 percent of all the cases in the U.S. This report analyzed nearly 24,000 cases and found that about 30 percent of those cases involved communications failure. The incurred losses from these communication cases were quite substantial at $1.75 billion.

Q.) So it’s not a small problem.
A.) No, it’s really one of the key problems we see in both patient safety and medical liability. And if we look at the provider to provide a dyad, what is the specific type of communication breakdown that’s most prominent, it is communication, or miscommunication I should say, regarding the patient’s condition and that’s what occurred here.

Q.) Do people think of radiology as a common area for falls?
A.) They actually do not. You know, wearing my clinician hat, when I think of safety concerns when it comes to radiology, falls are not actually that high on the list. Typically I worry about the risks from IV contrast, such as contrast-induced nephropathy or allergic reactions. However, as this case shows, falls are a nontrivial problem. A lot of the research about falls and other safety hazards in radiology has come from Dr. Aberjadia and Dr. Monsorian, colleagues at MGH. In one study they performed looking at incidents in radiology, they found that falls accounted for about three percent of reported incidents.

Q.) When we talk about handing things off or transition in care, they are sort of two different things. You got a handoff from provider to provider that we’ve seen a lot of activity, I-PASS, other communication protocols that recognize that the care of the patient is being formally transitioned from one provider to the next or from one facility to another facility or unit. When they are going off for a test and coming back, is that the same thing?
A.) What I think is important to emphasize is the same principles apply, the same principles of having a good handoff. Which is, one, ideally you want to have to verbal handoff, and also you want to have that protocolized, you don’t want it to be ad hoc. You want to have a specific set of items that is important to cover so that you can make sure that handoff is done well each and every time. It doesn’t sort of rely on an individual clinician comfort with doing it.

Q.) In this case there was a piece of paper, some notes that identified the patient as a fall risk and then that kind of got lost. You hope that doesn’t happen, but you could in build in some redundancy?
A.) Yeah, exactly. Any time, any time a minor deviation from protocol has the potential to cause serious adverse events, you need to sort of ask yourself how can we strengthen the system? I think the two overarching principles to do that is to systematize the process and build a redundancy. So when it comes to systematizing or protocalizing the process, you alluded to one of the systems that you used for handoffs, which is I-PASS. Many people may know what I-PASS is, but for the folks who may not have heard about, I-PASS is a mnemonic that stands for the components of a specific verbal handoff. I stands for illness severity, P is for patient summary, A is for action list, and S is for situational awareness and contingency planning. And the second S is for synthesis by the receiver, basically reading it back to make sure that they have understood what you said and that also provides an opportunity to ask questions. You asked earlier, do you really need a full handoff with all the clinical history when they are going down to radiology? The answer is potentially not. And you can certainly imagine that radiology would come up with their own set of specifics, specific items that they want communicated to them when the patient goes down, such as: are they a fall risk? What is their renal function? Are they going to be able to follow commands if they need to, let’s say, hold still for the study? And I think there’s a lot of advantages to the verbal communication. So you want redundant systems, and you think what are some of the redundant systems that you might be able to put in place here, you can imagine, should there be a checklist in addition to a verbal handoff. Another thing you can imagine which is in use at some institutions is, once a patient is assessed to be at an increased fall risk, they will have a specific colored bracelet that identifies, a brightly colored bracelet that identifies them as being at a fall risk. And had this patient been wearing that bracelet—even if the transfer checklist had been lost or not included or not seen by the radiology technician—that might have been one other means of communicating information that might have alerted the radiology technician to the patient being at elevated fall risk, and potentially might have prevented this adverse event from occurring.

Q.) With an EHR, you have the patient is being moved from some floor down to radiology, there’s an EHR that follows them?
A.) With an EHR, one can imagine a fall risk flag that might be at the front of the screen and makes it difficult to physically lose that information as the patient is going from Point A to Point B. However, having the EHR shouldn’t sort of lull us into a sense of that the patient safety issue we saw here isn’t still going to be present. Because even if there is a flag in the EHR in the specific box where some of this information may typically live, I think there’s no substitute for a thoughtful systematic verbal handoff, in which case you can ask the questions you need in order to get the information that’s necessary for you to do your job safely. As I said, there’s no way to absolutely anticipate all the information the person you’re transferring the patient to may need. Having that conversation allows questions to be asked, and ensures that the information that needs to be conveyed is conveyed.

Q.) Thank you. Dr. Adam Schaffer is a hospitalist at Brigham and Women’s Hospital in Boston and Senior Clinical Analytic Specialist at CRICO. I’m Tom Augello.

Subscribe to MedMal Insider
Sign up and keep up.
First Published – May 16, 2019
Related To: Communication,  Nursing,  Other Specialities