Good News is Not No News

Our study of the 10 years from 2007-2016 indicates a 27 percent drop in malpractice claims and suits being asserted, with downward trends for virtually all physician specialties. That is an encouraging trend for the medical professional liability (MPL) insurers and a validation for health care leaders that efforts to reduce preventable patient harm are succeeding.

But it is not news. 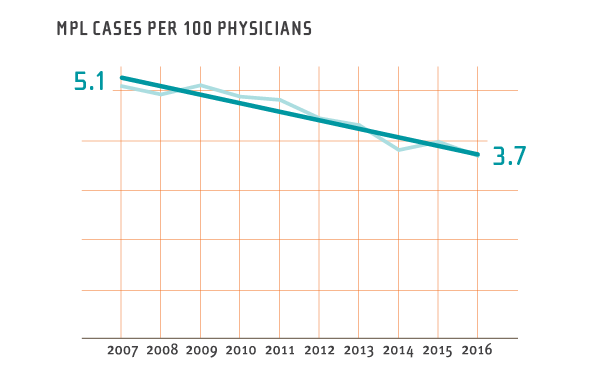 At least, it is not treated like news as is, say, a single surgeon’s egregious behavior in the operating room or a nine-figure jury verdict following a birth-related malpractice trial. There is no sensationalism in the stories of health care providers doing their jobs with vigilance toward patient safety. There are rarely headlines for the billions of health care encounters that go right. No one feels compelled to tweet storm about effective physician-patient communication, shared decision making, or a differential diagnosis being pondered.

“If it bleeds, it leads” is an appraisal of media prioritization most often attributed to New York writer, Eric Pooley, in the late 1980s. Various studies indicate that information consumers have a negativity bias that draws some comfort from situations worse than their own or confirms an existing (negative) opinion. It is truly a challenge to pass along good news.

But much of the news about malpractice trends, and by extension the well-being of providers and their patients, is good. For Ob/Gyns, the risk of having a claim or suit filed against them dropped 44 percent; surgeons saw a 23 percent decline. The percent of MPL cases involving allegations of diagnostic errors have also shifted downward, an encouraging sign that the bolus of attention focused on flaws in the diagnostic process of care is driving improvements.

The point is not to place a rose-colored filter over the tragic outcomes (and significant MPL indemnity) that lead to allegations of malpractice. Indeed, those are the stories that motivate efforts to improve systems and education across all health care settings. But those aren't the only stories that should grab the headlines.

Improvements…are gradual, and often consist of things that don’t happen — an absence of war, or famine or crime in much of the world. One can spot them only by looking at data, which tally both the occurrences and the non-occurrences.

Improvements in patient safety are also, frequently, gradual—but at their best, they lead to non-occurrences. And that's some good news.