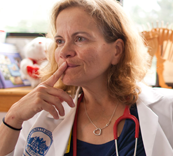 Humble Roots, High Expectations for Dr. Gonzalez and Her Patients

“My mother was forced to leave school when she was a kid by her father so she could work. My father just had a high school diploma. So we were not a medical family at all, far from it.”

This is what helped her to rise above her humble beginnings as a second generation American with Puerto Rican heritage. For someone who was always the smartest kid on the block—who always loved science—a career in medicine allowed her to apply her talents to her need to help people.

Now, among the toughest challenges she faces every day is keeping up with the kind of “case management” work that her commitment to patients requires. This takes on more import because her practice’s patient population features a large cohort with low education and low income, as well as many immigrants.

“Many times I think about my patients when I go home. It may not happen every day, but it happens several times a week. There have been times when I’ll even wake up and think about a patient. It could be because I can’t figure out what’s wrong with the patient. It can be that I’m just worried about the life choices the patient is making. Worried about response to treatment, many reasons. There have been times I’ve woken up in the middle of the night and I’ll have to jot it down.”

Some of that obsessiveness could stem from her experience as a defendant in a malpractice case. Gonzalez says she was affected profoundly by the allegations. But since winning at trial in 2010, she feels she has returned to some equilibrium—especially in her relationship with patients.

“I think I noticed it more after it was over. After it went to trial and there was a defense verdict, I realized that I was very excited to see patients again and so I think it probably had taken away some of the joy and put a little bit of fear in me. Every angry patient, every tiny little missed thing—if it was missed or not—or misinterpretation by patients of what I said, made me nervous.”

Having her first baby late in life in 2011, she has taken “multi-tasking” to a new level. A black bag containing a breast pump sits in the corner of the tiny cluttered office she shares with another clinician. She usually works late on Tuesdays and then she doesn’t see her daughter until morning.

“It is hard, feeling more of a pull to get home and have more time to be with her. It was hard to come back to work—and I pushed it as far as I could as a female physician in the United States, wishing I lived in Sweden or something. Once I came back, I appreciated being back, though, because I worked many years to become a physician and my patients depend on me.”