While all clinical services face some common patient safety issues, the malpractice risk profile varies significantly from head (neurosurgery) to toe (podiatry). The likelihood of being named in a medical professional liability (MPL) case, and the size of indemnity payments for cases closed by settlement or a plaintiff trial verdict, span a vast range.

One factor, however, that is relatively agnostic to clinical specialty, is the cost of defending a malpractice allegation. Roughly 70 percent of MPL cases are closed without an indemnity payment, but they all incur defense costs (expenses). And, while expenses for a single case range from a few hundred to several hundred thousand dollars, that variation is independent of who is named in the claim or lawsuit.

The Association of American Medical Colleges’ list of medical specialties runs from abdominal radiology to vascular surgery, with 133 others in between. CRICO’s national Comparative Benchmarking System (CBS) arranges those specialties into 76 clinical services, and for each MPL case codes one service as primarily responsible for the patient at the time of the alleged adverse event (a secondary responsible service may also be listed). 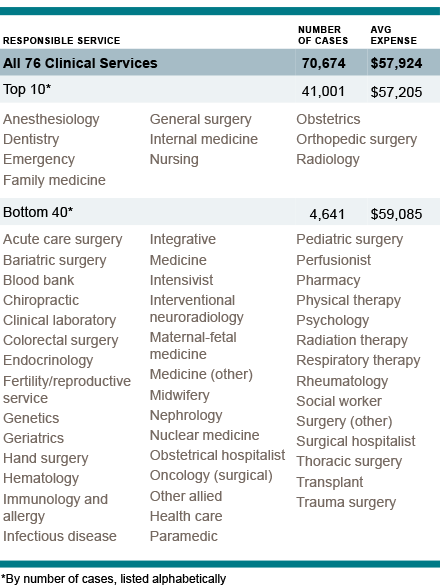 As demonstrated in CRICO’s Medical Malpractice in America report, the cost to manage MPL cases— regardless of specialties and services—has increased steadily and outpaced inflation. Concurrently, the average number of defendants per case has been rising, significantly. Cases with multiple defendants reflect both the complexity of team-based care (patients encounter more clinicians) and policy limit “stacking” (plaintiffs adding policy holders to an MPL case to increase potential indemnity). Typically, cases with more defendants require individual legal representation, adding complexity and cost to case management. Beyond legal fees, the use of MPL defense tools (mock trials, computerized renderings, jury studies, witness preparation) is increasing, as are their costs.

It is logical to focus malpractice risk reduction efforts on clinical services that experience the highest indemnity payments. At the same time, a return on investment can also be realized for patient safety resources applied to “less risky” clinical services by reducing events that trigger an assertion of malpractice that may not lead to indemnity, but does lead to misery for the named defendants and incurs significant management expenses.