How Residents Learn from their Mistakes

Every July, the latest class of physicians in training begins to apply the wisdom of “learn from your mistakes” in situations with dramatically elevated consequences. Embracing the upside of one’s inexperience is decidedly more daunting when you’re in a new environment and striving to prove you belong there. When things do go wrong, residents need reassurance that they are part of a team, not alone. And supervising attendings and other team members should lead trainees from any missteps toward learning opportunities.

Of course, all physicians are fallible and virtually every patient encounter introduces a unique set of risks for individual or systemic failures that threaten safe care. Fortunately, the vast majority of those errors are inconsequential to the patient and—we hope—instructive to the physician’s ongoing effort to improve patient safety. But some breakdowns in care do lead to immediate patient harm, or a delayed diagnosis and the missed opportunity for optimal treatment. And a subset of those adverse outcomes trigger assertions of medical malpractice.

Residents are held to the same legal standards as attending physicians—and they do get named in malpractice claims and suits. Frequently, residents who are named as co-defendants (i.e., along with attendings) are dropped from the case before it is resolved, but the experience is not forgotten. Based on CRICO’s national comparative benchmarking system, residents account for nine percent of physicians named in malpractice cases asserted from 2007–2016. Analysis of the 57,206 cases asserted over those 10 years shows that the proportion of residents named varies from 6% to 16% among the top 10 responsible services (which account for 57% of all cases asserted). 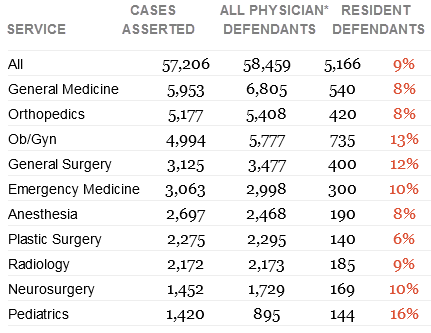 *A case may have multiple defendants, and not all defendants are physicians. Health care entities and/or other clinicians may also be named

For any dedicated caregiver, an allegation of negligence—often harshly worded accusations about one’s clinical judgment, technical ability, and interpersonal skills—lands hard and raises introspective questions. An established physician is likely to see a single adverse event as concerning, but also as an anomaly amidst a career of thousands of successful patient encounters: an important opportunity to assess one’s skill and judgment, but not a signal of general incompetence.

When the physicians at the center of such tragic events are trainees, their limited repositories of positive encounters and their relative inexperience with professional failure can seed serious doubt. In isolation, the impact of being sued can jar their confidence to the point that they might question their commitment to continue a career fraught with such risks. Rather than asking “What can I learn from this?” they may be wondering “Should I stop seeing patients?”

Assume that residents and fellows will encounter situations where things go wrong. Do not assume that they will be readily aware of formal support programs, and don’t presume someone else will be providing informal support. Traumatized trainees may not ask for help, but they probably will need some and certainly will benefit from it.